“B*tch better have my money’: where are Rihanna’s missing revenues?

Badgirlriri, as Rihanna is known on Instagram, currently counts over 94 million Instagram followers, has had 14  #1 hits (Billboard, n.d.), and is worth more than 600 million dollars (Robehmed, 2019). Living a life full of success was, however, not always the case for Rihanna. In fact her childhood was the opposite since she started out with close to nothing and a traumatic family life (Biography, 2020). However, Rihanna’s success did not come overnight, and she has had to overcome many, mainly financial, hurdles to become the international superstar she is now. One of those hurdles presented itself in 2008, when Rihanna fired her business manager. Rihanna claimed Patricia Williams and her company had stolen from her, since she only had $20,000 in her bank account at the end of 2008 (NME, 2008). This resulted in Rihanna suing the business management firm, Berdon LLP, for $35 million in 2012, reaching a settlement of $10 million.

Williams claims that Rihanna only had $20,000 to her name because her personal manager, Marc Jordan from Rebel One Management, had used all the generated revenue from her live performances to finance her videos and parts of her albums, since her record label Def Jam refused to finance anything (Celebitchy, 2008).

In order to examine the case further, it is necessary to take a closer look at the following data; So according to Figure 1 in 2008 she would have done two tours, grossing in total $39,950,000 dollars. This is 85% of gross earnings (the agency fee has already been deducted), therefore, one can assume Rihanna still had to pay her personal and business manager, and on the road expenses; her road crew consisted of more than 30 people (Ryzik, 2009). Compared to Figure 2, her first 3 albums only grossed $9,429,420 in total. This is based on a 6.6% royalty fee and standard album price of $10,99. The difference is vast and it immediately becomes clear why Rihanna’s team either needed a record label advance or third party funds to continue developing the artists’ career. Additionally it is important to note that the album sales statistics are from 2016, when Rihanna’s later success fueled much of her back catalogue consumption. According to Williams, the album ‘Good Girl Gone Bad’ only sold 150,000 copies in the first week (Celebitchy, 2008). This illustrates that live revenue was essential for Rihanna in those first years.

Concert tours and Rihanna’s net worth

Album sales and Rihanna Net Worth 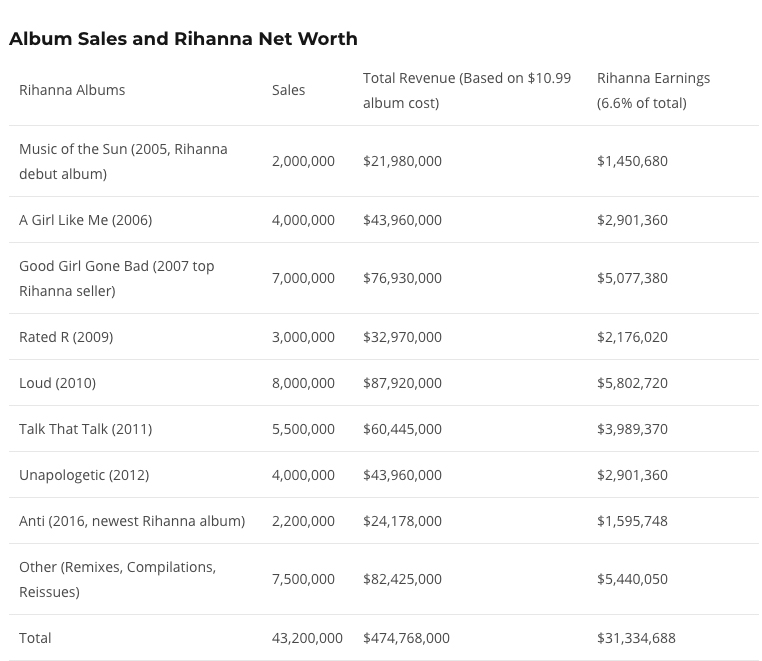 It is a fact that live revenue has long been the lifeblood for many musicians around the world. Currently around 75% of all performers rely on live performances for the majority of their own income (Lunny, 2019). It is notable that the live market has historically always been a much smaller market than the recorded music market, see Figure 3. However, in the same figure you can see that around 2009 the live revenue rose above recorded music revenue for the first time in almost 60 years. Based on this figure the question can be raised why live revenue has always been more important than recorded music revenue for artists, being that it is a much smaller part of the industry. This is due to the way record deals are structured, with artists often getting between 5%-15% royalty rates on recorded music (Passman, 2020). Therefore, while the recorded music ‘pie’ is much bigger, the artist gets a much smaller slice so to say.

Revenues of the US music industries between 1950 and 2015, based on Pollstar and RIAA.

2008 was a perilous year for the music industry in general with the sales of recorded music declining sharply (Sisario, 2008). As the income from recorded music fell, the importance of live revenue only became more evident. It provided a stable revenue stream in otherwise a very unstable industry. The resulting cash flow could be used to reinvest partly into the artist’s career, such as Jordan did in Rihanna’s case. He essentially used her live income to initially sustain and eventually elevate Rihanna’s recorded music career. This can be a valuable blueprint for any artist looking to grow their career at a high rate.

From this perspective, Jordan’s actions are very logical, since growth requires money and Def Jam was not willing to contribute. We can assume this was due to disappointing album sales and the decline of the total music industry’s value (Celebitchy, 2008).

Following this reasoning we can infer that Rihanna’s main income at this time, around 2008, was live revenue. Ancillary to that is merchandising at the abovementioned live shows. Unexpectedly, another primary income source for Rihanna was sponsorships or endorsements. It was the only way her manager was able to pay, together with her live revenue, for all the videos and production costs. This is one of the reasons there is so much branded content in Rihanna’s videos (Celebitchy, 2008).

Marc Jordan, her personal manager, had the responsibility to explain and discuss his plans with Rihanna regarding reinvesting any incoming monies. By neglecting to do this, he failed in his duties as a manager. Consequently, Rihanna moved her management to Roc Nation (Rap-Up, 2010). A personal manager always has a fiduciary duty towards the artist, meaning the manager must stake the artists’ interests above their own (Heyman, 2015). In this scenario Jordan has not fulfilled his fiduciary duties, possibly because he placed his own interests (the growth of his artists’ career and essentially the growth of his revenue stream) above Rihanna’s interests (saving money, building a long term financial plan, having enough money to sustain herself). It is also possible Jordan had power of attorney for Rihanna and perhaps orchestrated and executed his plans without a single signature from Rihanna herself, but that information cannot be confirmed or denied.

At the same time, it was up to Patricia Williams and the other employees at Berdon LLP to advise Rihanna on the financial and business aspects of her career, since they also had a fiduciary duty. The fact that she was not aware of her financial situation means that Berdon LLP had faltered in their duties. Additionally, they charged a commission of 22% opposed to the industry standard of 5% (Rarolae, 2015), and gave Rihanna unfounded real estate investment advice (Smith, 2014) resulting in a loss of  $2 million dollars (Smith, 2014). One can presume these reasons are why Berdon LLP settled out of court for a fee much lower than Rihanna had initially sought (Smith, 2014).

It could be argued that Rihanna herself also had the responsibility of actively seeking out the information regarding the operations of her own business, but at the time of writing there was no proof for or against her having done this.

All in all, the author of this paper believes that Rihanna was justified in firing and consequently suing Berdon LLP as well as firing her personal manager Marc Jordan. The biggest mistake her team made was not informing Rihanna of her financial situation or the direction of her cash flows. One can only imagine that she would have agreed to such a plan, recognizing that the desired growth would only be possible using revenue from sponsorships and her live revenue. This case study also emphasizes how important live revenue can be for all developing artists. While an artist is always responsible for their own careers and choices, they also depend on their team to make informed decisions. Rihanna successfully prevailed and rearranged a new team around herself, resulting in her becoming one of the wealthiest female musicians of this decade (Robehmed, 2019).

Heyman, B. (January 22nd, 2015). Understanding Artist Management Agreements, Part 1: What Does (and Doesn’t) a Manager Do? https://blog.sonicbids.com/understanding-artist-management-agreements-part-1-what-does-and-doesnt-a-manager-do#:~:text=The%20manager%20has%20the%20obligation,known%20as%20the%20management%20agreement.

Lunny, O. (May 15th, 2019). Record Breaking Revenues In The Music Business, But Are Musicians Getting A Raw Deal? https://www.forbes.com/sites/oisinlunny/2019/05/15/record-breaking-revenues-in-the-music-business-but-are-musicians-getting-a-raw-deal/?sh=230c17a37ab4

Naveed, K., C. Watanabe, and P. Neittaanmaki (2017). Revenues of the US music industries

Rarolae (2015). WATCH: @Rihanna Identifies Her Former Accountant As The B*tch That Better Have Her Money In New Visuals. https://rarolae.com/watch-rihanna-identifies-her-former-accountant-as-the-btch-that-better-have-her-money-in-new-visuals/

A synching ship: how to navigate the currents of modern music consumption

Syncs – how do they work?

Homegrown: A look at the Zac Brown Collective

A synching ship: how to navigate the currents of modern music consumption

“Baba baba, I’m lovin’ it”. For many people this will instantly trigger memories of the all present McDonalds commercials from the 00’s, and for...
Read more

Homegrown: A look at the Zac Brown Collective

The music industry has changed significantly over the past 50 years; Back in the 1970’s, record labels were the gatekeepers to big audiences and...
Read more

To be updated with all the latest news, offers and special announcements.

This website uses cookies to improve your experience while you navigate through the website. Out of these, the cookies that are categorized as necessary are stored on your browser as they are essential for the working of basic functionalities of the website. We also use third-party cookies that help us analyze and understand how you use this website. These cookies will be stored in your browser only with your consent. You also have the option to opt-out of these cookies. But opting out of some of these cookies may affect your browsing experience.
Necessary Always Enabled

Any cookies that may not be particularly necessary for the website to function and is used specifically to collect user personal data via analytics, ads, other embedded contents are termed as non-necessary cookies. It is mandatory to procure user consent prior to running these cookies on your website.