The Song That Remains The Same

The corporate world of publishing

The music publishing industry is an old one, stemming from the invention of the sheet music press. However, nowadays publishers focus on copyright and the exploitation of said copyright. It has been an industry rife with competition, take-overs, mergers, and acquisitions, but the past several years have also introduced a lot of creativity, innovation and technological advancements. Music streaming has changed the industry, and as the industry grew as a whole so did the publishing industry. But what exactly has the effect been from streaming, and is the industry poised for any change in regards to acquisitions and take-overs?

Downtown had been a relatively new player in the publishing world, established only in 2007, with just one employee in addition to the founder (Mansfield, 2016). However, the company quickly developed into a worldwide corporation, with offices in New York, Los Angeles, Nashville, London & Amsterdam (Mansfield, 2016). The company initially focussed on publishing, signing artists on their roster such as John Lennon & Yoko Ono, Miles Davis, Wu-Tang Clan, The 1975 and more, having garnered over 145,000 musical works (Cantrell, 2021). Downtown has successfully established itself as a serious player in the publishing world.

However, in 2021, Downtown decided to divest their publishing catalogue, a staggering 145,000 owned and co-published compositions (Paine, 2021), to Concord, a music publisher who already had 400,000 works in their catalogue (Concord, n.d.), partly due to taking over publishing company Imagem in 2017 (Ingham, 2017). Nonetheless, Downtown is retaining their publishing administration clients, since these were not part of this deal (Paine, 2021), and additionally, Concord is taking over all existing songwriter contracts (Christman, 2021).  Founded in 1973, Concord has been steadily buying up other catalogues and increasing in size for over 30 years (Music Business Worldwide, n.d.). The company has a rich history and an extensive roster, including songwriters such as Trent Reznor, Irving Berlin, Phil Collins and many more (Concorde, n.d.)

Notwithstanding, this acquisition did not impact everyone involved positively, since Downtown was forced to lay off all their Nashville employees (Aswad, 2021). Contrary to that, it does grow Concord their market share and status as a publisher.

While the Downtown acquisition deal was for a high price, reported around $350 million (Christman, 2021), there have been much larger acquisitions, some only several years ago. One such acquisition was when SONY acquired the remaining ownership stakes of EMI Music Publishing it did not already own, in 2018.

SONY is known worldwide for its electronic products, videogames and its music businesses, with a rich history of acquisitions and take-overs. Founded in 1946 in Japan (Sony Group Portal, n.d.), they have grown steadily throughout the years, finally becoming the largest publisher and second largest record label in the world (Music and Copyright, 2021).

EMI was worldwide the largest music publishing company and fourth largest record label (Terra Firma, n.d.), with its roots in the United Kingdom. They were bought by Terra Firma in 2007, and after several years, the company was split up in 2012 (Terra Firma, n.d.) and about 30% was sold to SONY/ATV (now known as Sony Music Publishing) (Stassen, 2018). After 6 years SONY was finally able to purchase the remaining ownership stakes from the Mickael Jackson estate and the Mubadala Investment Company (Stassen, 2018). It seemed that EMI had been in financial dire straits before being bought by Terra Firma (Terra Firma, n.d.), so this sale gave the company, the employees (and all the songs in the catalogue) a chance to continue. However once SONY stepped in as sole owner, it was quickly absorbed into Sony Music Publishing and with this purchase SONY became the biggest music publishing company in the world. This gave them unparalleled leverage, some even feared it would give them too much power, which is why organisations such as IMPALA lobbied for a blocking of the deal, but to no avail (Cooke, 2018).

As one can see the publishing industry has had a lot of takeovers and mergers, but some companies have been able to stay independent, so far. However, the bigger the publishing company and catalogue, the higher on the wishlist of acquisitiations they are.  Close to the top of that list would most likely be Reservoir, an independent publishing company founded in 2007 by Golnar Khosrowshahi. The company currently owns more than 130,000 song copyrights and 26,000 master recordings (Musically, 2021).

With the recent power fluctuations in the publishing industry Reservoir would most likely be an attractive target for aggressive buyers. Companies such as SONY (Stassen, 2021) and Hipgnosis have been on an aggressive buying spree and Reservoir their catalogue, including songs by artists such as Lady Gaga, John Denver, The Beatles and many more, is a highly valuable catalogue (Reservoir, n.d.). Reservoir themselves are also not strangers to acquisitions, having just bought publishing house Shapiro Bernstein in 2020 (Ingham, 2020) and Chrysalis Records in 2019 (Ingham, 2019).

Following these acquisitions, it has been made known that Reservoir will be going public on the NASDAQ. This will most likely increase the valuation of the company, as they expect to generate $246 million from the listing (Musically, 2021), and the company said it “expects to continue to follow its disciplined acquisition strategy” (Ingham, 2021). This would indicate that the company does not plan on selling, however, when we look at competitor Hipgnosis, who published a prospectus that would have them raise more than $2 billion in 2020, by a series of new share issues (Ingham, 2021), it seems like they would be in a position to buy Reservoir. The prospectus indicates Hipgnosis would have almost $1 billion more than the $788 million valuation Reservoir currently has (Ingham, 2021).

An acquisition, take-over or even a merger between the two companies would guarantee the creation of one the biggest independent music publishers in the world, perhaps even big enough to dethrone Sony Music Publishing from the #1 spot.

The decisions for these (potential) acquisitions and take-overs  came at an opportune time. Between 2001 and 2018 the publishing industry had seen a growth that culminated in an all-time high, see Figure 1. 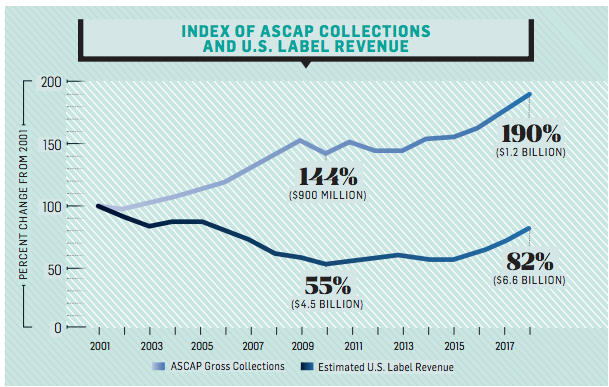 One can assume that since the ASCAP Gross Collections have grown steadily between 2001 and 2018, that the value of copyrights has increased at the same rate. Contrary to that are the label revenues, which had a small dip in the years 2005-2010. One can assume that through the introduction of streaming, for example Spotify their launch in the United States in 2011 (D’Orazio, 2012), the label revenues stabilized and later on increased. Based on Figure 1 one can deduce that ASCAP collections have steadily increased, even when record label revenues were decreasing. Figure 1 shows that when the label revenues start growing again, the ASCAP collection values grow at the same rate. One can deduce that the value of copyrights had been growing, stabilized somewhat between 2010 and 2015 and then grew alongside the label revenue. This is in part attributable to ‘evergreen hits’, songs that have stayed relevant throughout the years and are experiencing a resurgence in popularity on streaming platforms.

To summarize, it seems that the introduction of streaming has had a positive impact on the value of copyrights. All the valuations have steadily been going up, both for copyrights and publishing companies, which is reflected in the monumental acquisitions being made. As for acquisitions and corporate take-overs, it seems that the bigger your catalogue, and the better songs you have, the higher the price tag on your business. As the growth continues the author expects acquisitions to increase in frequency and size.

Music and Copyright (April 21st, 2021). UMG and SME put the market share squeeze on WMG and the independent sector. https://musicandcopyright.wordpress.com/2021/04/21/umg-and-sme-put-the-market-share-squeeze-on-wmg-and-the-independent-sector/

Reservoir (n.d.). About Us. https://www.reservoir-media.com/about-us/

Stassen, M. (May 27th, 2021). SONY’S SPENT $1.4BN ON MUSIC ACQUISITIONS IN THE LAST SIX MONTHS… AND ROB STRINGER’S NOT STOPPING THERE. https://www.musicbusinessworldwide.com/sony-musics-spent-1-4bn-on-acquisitions-in-the-last-six-months-and-rob-stringers-not-stopping-there/

From poster to post: a marketing analysis of Spotify and Deezer

Abstract The musical equipment industry can be a highly competitive industry, and as such, brands operating within this industry need to have a well-defined marketing...
Read more

From poster to post: a marketing analysis of Spotify and Deezer

Abstract The disparity in subscriber numbers between streaming services Spotify and Deezer, could possibly be explained by the difference in execution of their marketing strategy...
Read more

Keys of change: a brief analysis of the modern musical instrument market

Mankind has a rich history of music. Ever since the dawn of civilization, there have been people who have been documented engaging in song...
Read more

To be updated with all the latest news, offers and special announcements.

This website uses cookies to improve your experience while you navigate through the website. Out of these, the cookies that are categorized as necessary are stored on your browser as they are essential for the working of basic functionalities of the website. We also use third-party cookies that help us analyze and understand how you use this website. These cookies will be stored in your browser only with your consent. You also have the option to opt-out of these cookies. But opting out of some of these cookies may affect your browsing experience.
Necessary Always Enabled

Any cookies that may not be particularly necessary for the website to function and is used specifically to collect user personal data via analytics, ads, other embedded contents are termed as non-necessary cookies. It is mandatory to procure user consent prior to running these cookies on your website.